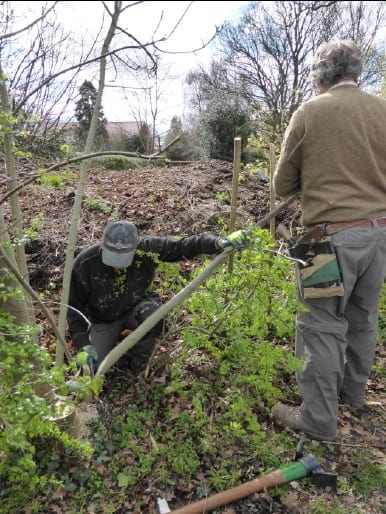 The Season of Creation (Creation Time) opened at services at All Saints Church Wokingham with a celebration of the biodiversity of its own churchyard. During the service churchyard steward, John Smith,  gave a talk highlighting the biodiversity of the 4-acre churchyard surrounding the church. He spoke about the large veteran English Oak tree on the churchyard’s Norreys Avenue boundary, estimated to be more than 350 years old with a girth of some 4 metres. Such oak trees are an ecosystem in themselves with many other species interlinked with them. Read more about this here; here and here.

John explained that the grass in sections of the churchyard is left to grow as a meadow during the summer months to encourage wildflowers. This is then mowed down in the autumn. This in turn encourages pollinators such as bees and hoverflies, and butterflies. 46 species of wildflower have been recorded in the churchyard. The churchyard is a Christian burial ground which is still visited by many bereaved relatives. John acknowledged that this management policy can cause tensions with some local residents who believe that a churchyard should be mown short throughout on the model of a typical municipal cemetery. However, he explained that pathways to grave areas are kept mown and that also that residents are always able to request that the grass is cut around their loved one’s grave for ease of access. Area of current new burials and the Garden of Remembrance are kept mown and not included in the wildflower policy. Read more here about the importance of grass in churchyards for biodiversity.

Thirdly John described the history of the Norreys Avenue boundary of the churchyard. Until around 2000 it had been an ugly high wooden fence with concrete posts. This was removed and replaced with a boundary of native species of bushes which were then laid as a hedge a few years after planting. This also encourages wildlife of many kinds. Further layering of this hedge will be carried out over the next decade or two and John expressed the hope that he would be involved in at least the next two of these hedge layings! Find out more here about hedge laying (or layering) and why it’s so important to biodiversity)

What’s been going on in the church this week?